Other parents at our bereavement said the Monday after camp is hard… I thought we would slide past that since we are still fully immersed in child loss … no breaks. This weekend wasn’t a rare chance to talk about her death for us.. we still get to do that a lot.. 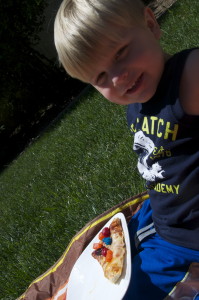 **fruit snacks on pizza. They loved it**

Today was a sad, sad sissy day.. For me and Tony and Jonathan… maybe even Nicholas too… but its so hard to read him. There was a lot of tantruming and acting out from him today.. could be that he is 2… or it could be that he missed her today too..  or it threw him sensing all of our pain.

or it could be something different entriely.

This will be our forever in parenting too I realize.. it won’t stop when they are 13… I saw that this weekend.. with kids that had lost siblings years earlier.. I heard it from the counselors, that they came back year after year as children, to share and try to grasp their grief at the different ages.

I used to judge other parents…allowing their children to, in my eyes, misbehave. Babying them.. or being to strict. Even having a child far too old in a stroller.. no more. What do I know? So many variables now that the family could be going through. .

.. .who would have looked at this 6 yr old in a stroller and known she was just a over a month away from her death? 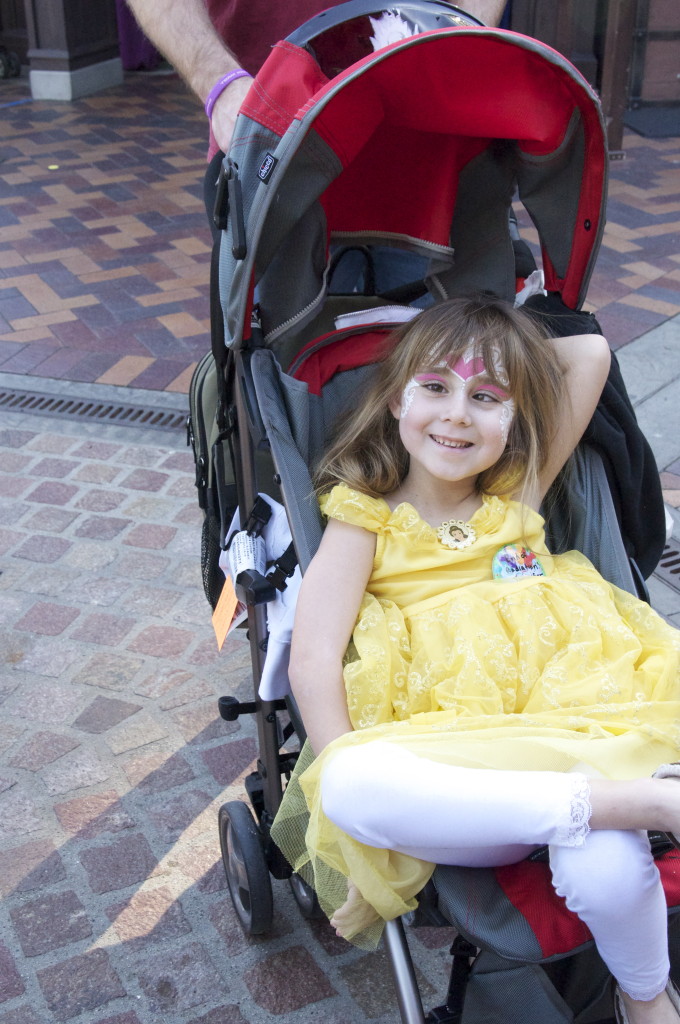 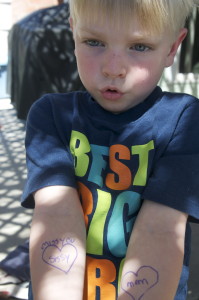 This is Tony’s final week off of work. We are both pretty darn scared for him to go back.. but we are making the most of this week. Today was a recovery day.. we were all too off our game to plan much.. But we tried to make it a fun day. I drew a tattoo on Nicholas after we told them that Daddy was getting a new one tomorrow evening.. His was a heart that says mom. Jonathan asked for one too.. a mom one and a sissy one that also says “I miss” above the heart.

We shared a picnic outside after the boys helped Tony change the oil in his car. We used to do that daily around this time last year. I would pick JLK up from preschool and she would ask to have lunch outside. We shared some of those memories today. Nicholas didnt have much to contribute but seemed to just listen to what I shared..  .

Inside Jonathan found my old diaper bag.. the one still packed from our last oncology appointment.. sitting where I laid it down. I haven’t been able to move it or go through it. Jonathan looked into it and found her watch.

It was a Ariel watch that changed colors.. she loved it. It was something she could show the endless doctors and nurses we talked with each day.. something that seemed to amaze them.. and deflect attention away from her just for a moment. I remember so well her fingers with a bandaid on each finger from chewing them down to almost nothing…pushing the button to make it light up. 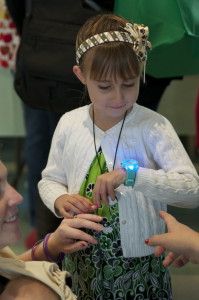 When I saw it again.. I cried. I couldn’t stop it so I embraced it and tried to talk with Jonathan about it. I told him what I remembered about her wearing it. I told him how sometimes memories just flood back.. I shared a little bit about how it gave her something to not be so scared at her radiation appointments.. I kept crying when he asked to wear it.. the pride 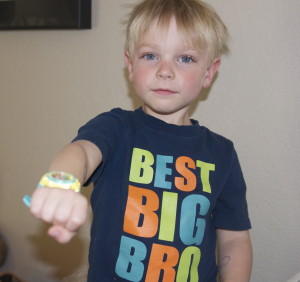 he felt.. a few more tears when he insisted on showing it to his little brother.

He knew how much it meant to me.. that it was a big deal for me to trust him to wear it.. he took it very seriously.. taking it off to go to the bathroom to be sure it didn’t get splashed on..

After the picnic we planned out the rest of our week.. trying to make sure we get everything done we want/need to. One thing Tony is hoping to do is a campout at home. We don’t have a tent.. so he planned to go to Costco to get one.  I felt ready to go.

Not at all. It was one trigger after another.. Seeing the girls dresses.. remembering talking with Jennifer about buying matching dresses for her and Charlotte.. knowing Costco was one of the only places that carried both their sizes. That was the most important thing to her for Fairy’s wedding… that she and Charlotte matched. .. same for Thanksgiving and anytime she could put them in even semi matching outfits.. 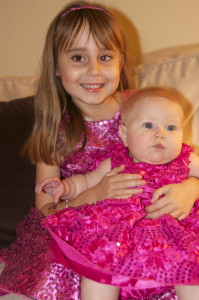 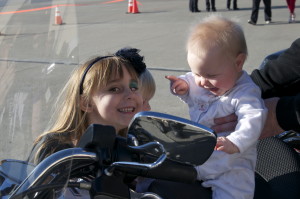 She whole heartedly loved having a sister.. I loved giving them the gift of each other.. The loss of sisters is a unrelenting mourn.

Then so many gluten free foods. I told Tony I wasn’t ready… that this was a bad idea. He offered to leave.. but I knew the kids would be upset if we didn’t finish the trip. I cried quite a few times. .. It felt like the walls were closing in on me.. So hard to feel all of that but keep it together for my boys.

Next up was crossfit. Neither of us wanted to go..But we did. It was a hard workout today.. but the amazing thing was our brains had no room for anything but the movement of our bodies for that short amount of time.. It was kinda like a reset button.. Like when I have a migraine.. if I can just sleep for 5 minutes I can wake up feeling much better.. that was crossfit today.

We left feeling tired.. but with some relief.. I realized how rare it is my mind isn’t thinking of her.. she consumes me.. Its draining..

..and I feel really awful saying that.

I love her. I want to think of her all the time.. it just hurts so much.. I think pain take up a lot of mental energy. I’ll take it though.. because right now all I have is the memories and the pain that comes along with it. I will sheepishly admit though.. it was nice to have a momentary respite.

We ate dinner together .. family style like she loved. Our boys then fought.. they argue a lot.. I’m not used to it since its was so rare with Jennifer and Jonathan. I gotta look at that more. Try to figure out what I am doing wrong. To raise them up to be each others champion.

Jennifer and Jonathan were truly best friends.. I am sure I compare too much..I waste energy wanting her back… lamenting the relationship that was lost.. not only between the two of them but also how she was teaching them how to treat each other.. It was just so different when she was alive.

With her gone I am so scared…. so very scared that the glue that held them together is gone. 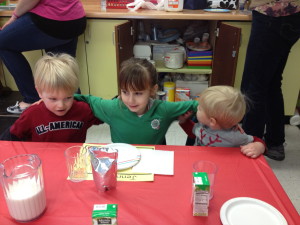 I let all of us be too dependent on her.. How was I to know we would all outlive her?

Today was hard.. much harder than I expected it to be..

I guess the next day really always is. 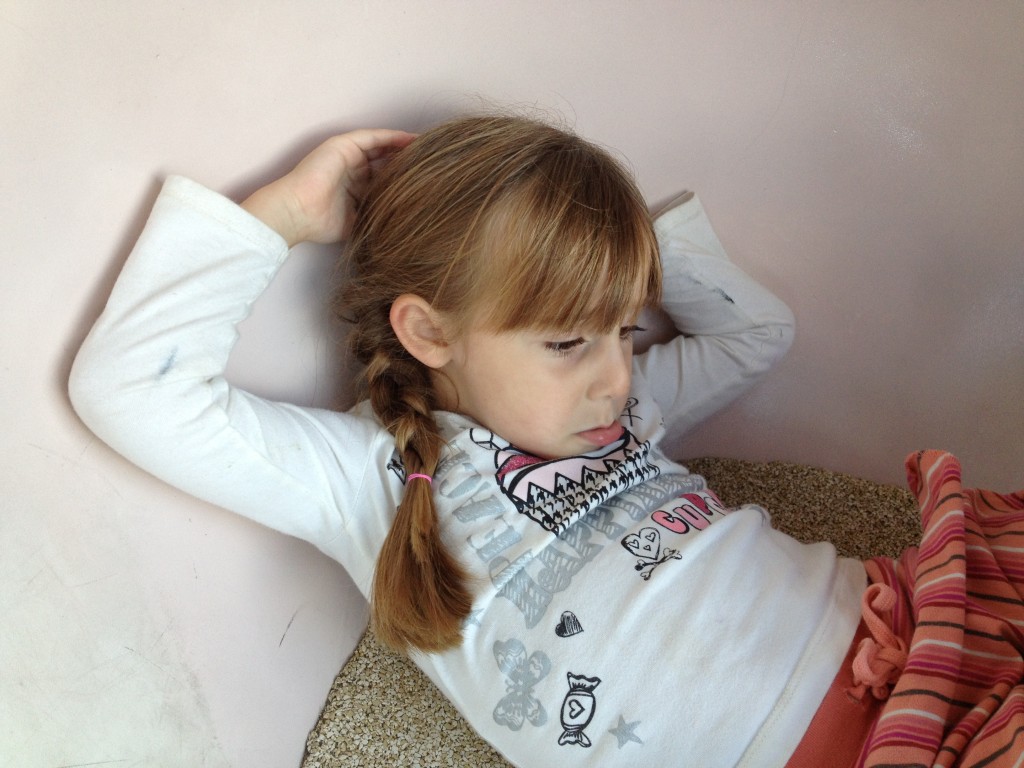